This article was originally published on The Strategy Bridge on November 16,  2014.  I am forever grateful to the team at The Strategy Bridge for inviting me to participate with an outstanding array of bloggers in writing our reaction to the United States Army’s Human Dimension White Paper.

The United States Army has one of the toughest jobs on the planet. It must be everything to everybody and failure is not an option. Foreign policy decisions often drive the Army away from its traditional vision, best defined by the Army’s website on September 13, 2001, “The Army has a non-negotiable contract with the people of America to fight and win our Nation’s wars[1].” Though Title 10 Section 3062 assigns the Army the responsibility of “the preparation of land forces necessary for the effective prosecution of war,” and Merriam-Webster defines war as “a state of usually open and declared armed hostile conflict between states or nations,” since the attacks of 9/11 the majority of activities conducted by the Army have not resembled war as a major regional contingency against a near peer competitor in the Fulda Gap sense[ii] [iii] [iv].

Having learned from the foreign policy decisions made since the 9/11 attacks, the Army has maintained its traditional focus on winning wars, but also expanded its vision via the Army Operating Concept, which “[D]escribes how future Army forces will prevent conflict, shape security environments, and win wars while operating as part of our Joint Force and working with multiple partners[v].” “The Human Dimension White Paper,” released on October 9th, 2014, “[E]stablishes a framework for the Army to assess, integrate, and synchronize its training and education, science and technology, holistic health and fitness, medical and personnel policies, programs, and initiatives in support of the Army Profession[vi].” Of particular interest in this document is “Figure 3: The Changing Basics,” which seeks to compare historic training norms with the training the Army views is required to address today’s threats. 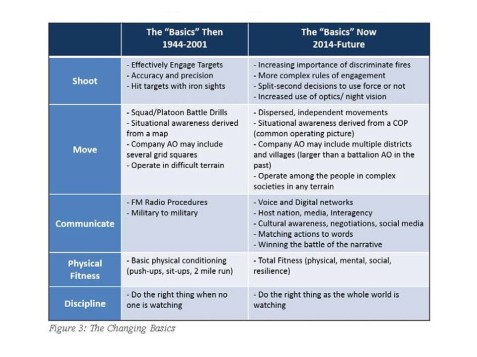 Though I agree with the content of figure three, I disagree with the foreign policy decisions that led to this change of vision within the Army. I also fear this change of vision will lessen the Army’s ability to fight and win a major regional contingency against a near peer competitor. Will an Infantryman trained to fire discriminately under complex rules of engagement hesitate when assaulting an enemy trench line? Will a focus on dispersed movements cause Army leadership to be less adept at commanding and controlling large units during an armored division push into a foreign land? Will cultural awareness cause Infantrymen to think about building rapport when they should be fulfilling their primary mission “[T]o close with the enemy by means of fire and maneuver in order to destroy or capture him, or to repel his assault with fire, close combat, and counterattack[vii]?” Though these examples may seem extreme, they serve as a reminder of Sun Tzu’s maxim “Preparedness everywhere means lack everywhere.” 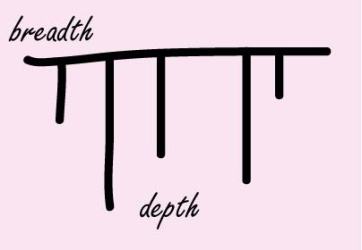 The events since the attacks of 9/11 have forced Army leadership to choose how it will fulfill its Title 10 Section 3062 responsibility: Prepare for a less likely major regional contingency against a near peer competitor or prepare for a more likely contingency against an asymmetric threat. Based upon the realities of foreign policy decisions and the constraints of law and budget, I applaud the Army in its efforts to achieve a balanced force that can “[P]rovide unique capabilities and multiple options to the President, Secretary of Defense, and Combatant Commanders[v].” However, as the Army looks at itself and asks if it is sufficiently organized and trained to address today’s threats, so too should Congress ask itself whether the laws that define the Department of Defense and its subordinate components are sufficient, as should the White House ensure its foreign policy decisions do not violate the Ranger Handbook’s leadership principle of “Know your unit’s capabilities and limitations, and employ them accordingly[x].”