Russia, China, Iraq, Iran, Afghanistan, and North Korea — from a U.S. point of view there may be many reasons to worry.  However, letting worry, emotion, or politics rule the day can lead to bad outcomes.  Below is a graphic that I made tonight called National Security Basics By The Numbers.

Start at the red box “National Security Stimulus” and envision something happening.  A recent example may be North Korea’s missile test.  Then move onto the amber box and ask yourself “What Does It Matter?”  Yes, North Korea tested a missile, but why does that matter to the U.S?  To Japan?  To South Korea?  To China?  Then move onto the green box “What Can Be Done?”  Think about what could be done regarding the most recent North Korea missile test.  Finally, move into the gray box called “Justification Check” and, ignoring the word war since sanctions can sometimes cause war-like effects, ask yourself if your proposed course of action is justified?  If yes, you’re done.  If not, start over.

I hope you find this graphic useful. 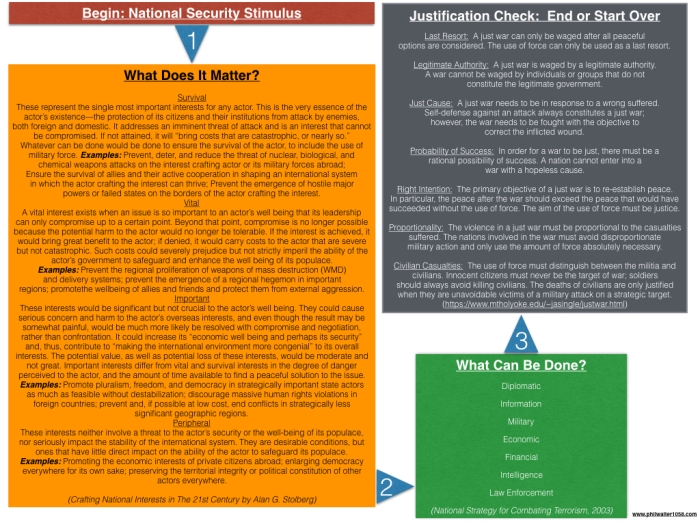