To aid planners in the U.S. military as they develop joint operational plans, the August 11, 2011 version of Joint Publication 5-0, “Joint Operational Planning” depicts notional phases of an operational plan.  These phases are known as shape, deter, seize initiative, dominate, stabilize, and enable civil authority[i].  In this article, I will pair some of my favorite national security quotes under the heading of national strategy as well as each phase of a notional operational plan.  These quotes are drawn from Carl von Clausewitz[ii], Jeffrey A. Farnsworth[iii],  Rear Admiral J.C. Wylie[iv], Sun Tzu[v], Winston Churchill[vi], and B.H. Liddell Hart[vii].  The pairing of quotes with these headings is purely based upon my interpretation and I am confident others would disagree.  Despite this, I hope you enjoy these amazing quotes and think about how they can serve as inspiration during the development of national strategy and joint operational plans. 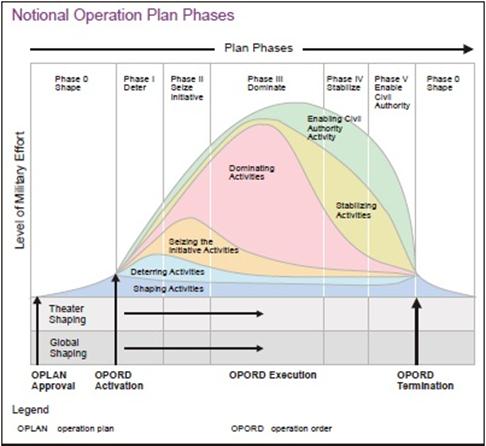 “No other possibility exists, then, than to subordinate the military point of view to the political.”  -Carl von Clausewitz

“Strategy formulation, by its nature, evaluates and validates the appropriateness, practicality, and consequences of policy.”  -Jeffrey A. Farnsworth

“[Strategy is] A plan of action designed in order to achieve some end; a purpose together with a system of measures for its accomplishment.”  -J.C. Wylie

“The point to be made is this:  there are actually two very different kinds of strategies that may be used in war.  One is sequential, the series of visible, discrete steps, each dependent on the other that preceded it.  The other is the cumulative, the less perceptible minute accumulation of little items piling one on top of the other until at some unknown point the mass of accumulated actions may be large enough to be critical.  These are not incompatible strategies, they are not mutually exclusive.  Quite the opposite.  In practice they are usually interdependent in their strategic result.”  -J.C. Wylie

“To subdue the enemy without fighting is the acme of skill.”  -Sun Tzu

“When your weapons are dulled and ardor dampened, your strength exhausted and treasure spent, neighboring rulers will take advantage of your distress to act.”  -Sun Tzu

“Never, never believe any war will be smooth and easy, or that anyone who embarks on the strange voyage can measure the tides and hurricane he will encounter.  The statesman who yields to war fever must realize that, once the signal is given, he is no longer the master of policy but the slave of unforeseeable and uncontrollable events.”  -Winston Churchill

“The degree of force that must be used against the enemy depends on the scale of the political demands on either side.”  -Carl von Clausewitz

“But we should at once distinguish between three things, three broad objectives, which between them cover everything [under the subject of war plans]:  the armed forces, the country, and the enemy’s will.”  -Carl von Clausewitz

“If you concentrate exclusively on victory, with no thought of the after effect, you may be too exhausted to profit by the peace, while it is almost certain that the peace will be a bad one, containing the germs of another war.”  -B.H. Liddell Hart

“Furthermore, while the horizon of strategy is bounded by the war, grand strategy looks beyond the war to the subsequent peace.”  -B.H. Liddell Hart

“A skilled commander seeks victory from the situation and does not demand it of his subordinates.”  -Sun Tzu

“Generally in war the best policy is to take a state intact; to ruin it is inferior to this.”  -Sun Tzu

“The people who have not yet been conquered by the enemy will be the most eager to arm against him; they will set an example that will be gradually followed by neighbors.”  -Carl von Clausewitz

“…peasants in arms will not let themselves be swept along like a platoon of soldiers.  The latter will cling together like a herd of cattle and generally follow their noses; peasants, on the other hand, will scatter and vanish in all directions, without requiring a special plan.”  -Carl von Clausewitz

“For there has never been a protracted war from which a country has benefited.”  -Sun Tzu

“The ultimate determinant in war is the man on the scene with the gun.  This man is the final power in war.  He is in control.  He determines who wins.”  -J.C. Wylie

“[Postwar strategy enabling civil authority] must have an acceptable and locally viable philosophic base; and it must be a strategy suited to, rather than imposed upon, the actual scene.”  -J.C. Wylie