In 1977, after many years of advocating for the U.S. Army to develop a capability similar to the British 22nd Special Air Service (SAS) and in response to multiple terrorist incidents worldwide, Colonel Charles A. Beckwith established the 1st Special Forces Operational Detachment-DELTA. 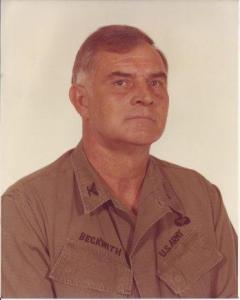 personnel to depart Oman and land at a remote site in the Iranian desert known as DESERT ONE.  There they would rendezvous with eight RH-53D helicopters launched from the USS Nimitz in the Gulf of Oman.  The assault force would board the helicopters and move to a hilly location just outside of Tehran.  The following night, the assault force would move by truck to Tehran and rescue the hostages[iii].

To successfully execute OPERATION EAGLE CLAW, the commanders and planners agreed that six helicopters would be necessary[iv].  Eight helicopters were dispatched from the USS Nimitz to DESERT ONE as a precaution against aircraft failure.  Due to a variety of factors, only five helicopters were ultimately operational at DESERT ONE.

Based on this, Colonel Beckwith recommended the mission be cancelled.  There are innumerable resources available to study nearly every aspect of OPERATION EAGLE CLAW.  As I am writing for The Military Leader, I wish to focus on Colonel Beckwith’s recommendation to cancel the mission.

Dawn of a New Capability

In 1962 Colonel Beckwith served as an exchange officer with the British 22nd SAS.  During this exchange he deployed to Malaya where he conducted counterinsurgency operations with the SAS.  These experiences drove him to advocate relentlessly for the U.S. Army to develop a capability similar to the 22nd SAS[v].  His efforts proved successful when Colonel Beckwith established DELTA in 1977.

Let us now walk a mile in Colonel Beckwith’s boots.  He had spent over a decade trying to convince the U.S. Army to develop a new capability.  Following multiple terrorist incidents worldwide, many of which ended in tragedy, he was given the opportunity to establish DELTA.

After nearly two years of building a selection program, selecting personnel, establishing a headquarters, developing tactics, techniques, procedures, as well as logistics, planning, and communications capabilities, DELTA was given the mission to rescue the hostages in Iran.

There in 1980, Colonel Beckwith stood on the packed sand at DESERT ONE and he is one helicopter short. Not two, not three, but one.  One helicopter.  All it takes for Colonel Beckwith to continue the mission and possibly rescue the hostages is for him to act against the go / no-go criteria that he developed prior to executing the mission.

A lesser leader would have made a different recommendation.  As a young man and later a Marine, Colonel Beckwith’s recommendation to cancel the operation fascinated me.  It still does to this day.  Though I doubt I will ever be in a similar situation, should the pressure mount and those around me possibly hope for compromise, I pray that I can be resolute in my position.  Colonel Beckwith’s steadfastness in the presence of indescribable pressure is a behavior leaders at all levels should model.